I wrote this blog post because I saw a woman throw a banana at Russell Brand. Bear with me on this one.

Yes, upon witnessing this act of fruit-based aggression I immediately related the incident to friends by typing a message about it. It struck me that the effort required to type the words ‘banana’ and ‘Brand’ on a modern Swype-style phone keyboard was incredibly annoying. My poor thumb scythed back and forth across the screen between the ‘A’s and ‘N’s for what seemed like hours. There must be a better way, I thought, to minimise the distance my thumb moves and thus delay the inevitable repetitive stress injury to my left hand.

In this post I’ll discuss optimising the layout of an English QWERTY keyboard in an effort to minimise the average distance a digit must travel to type a word. Let’s have a look.

When we talk about units of distance, in the above the horizontal and vertical offsets between letters are 1 unit. The distance required to type the word ‘QWERTY’ is then 5 units, or ‘TREE’ would be 2 units for example.

We can plot the distance between every pair of letters:

We can immediately see that the largest distances are between letters like Q and P. However this doesn’t matter very much because in English, those two letters don’t sit next to each other very often in words. Just as a sanity check, we can plot the average distance from each letter to all of the other letters:

You might look at this and think that it is fine for Q to be right out at the edge of the keyboard, as it is used infrequently, but maybe it would be better if A were a bit closer to the centre, as it is used much more frequently.

To quantify this notion, I took the Reuters corpus from the NLTK library and tallied up the frequencies of transitioning between different letters in the English language: 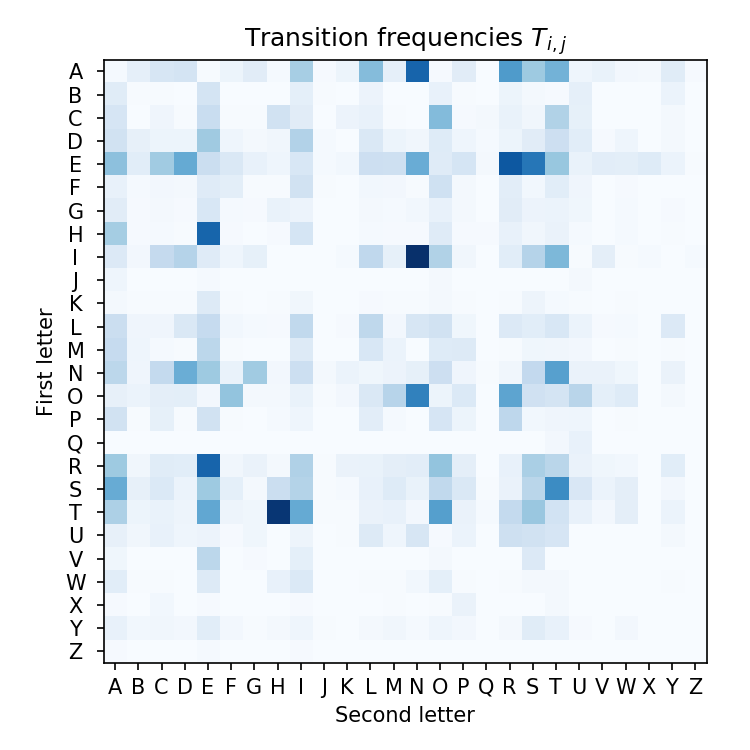 Very popular pairings of letters appear to be ‘TH’, ‘HE’, ‘IN’ and ‘AN’. If I were to minimise average distances spent swiping around the keyboard, I might want to get these pairs of letters as close together as possible.

We can visualise which keys contribute most to word distances by taking the above transition frequencies into account, multiplying them by their distances on a QWERTY keyboard: 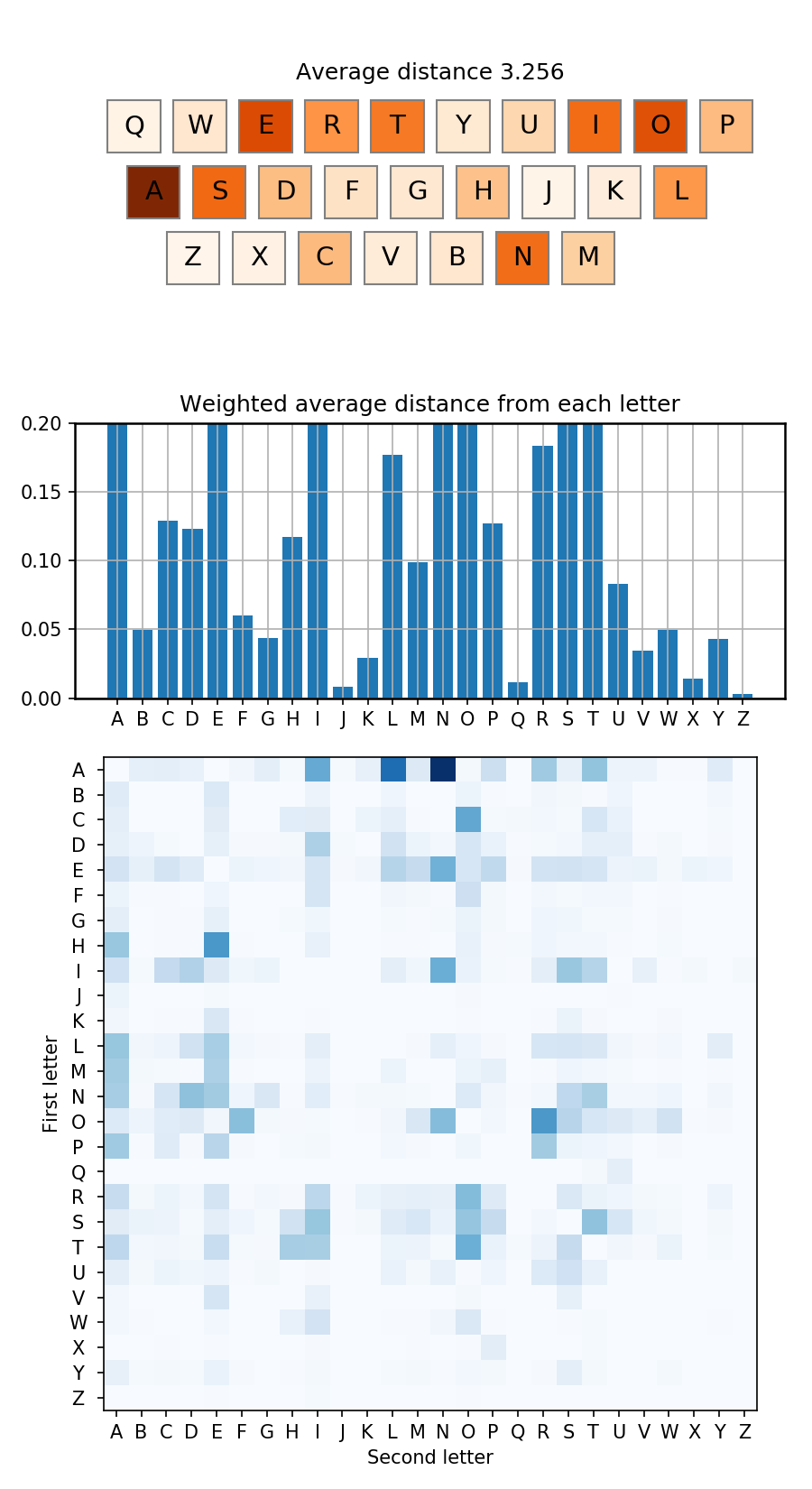 So here what really jumps out is that the ‘AN’ transition occupies a huge amount of distance when swyping the English language. The distance between A and N isn’t the largest on the keyboard, but because that letter pair appears so often the total distance is very large. We can also see that the total distances to and from the A key are the largest due to the fact it is a common letter and it sits at the edge of the keyboard.

Due to this, and other large distances, the average distance required per letter in the English language is approximately 3.2. On average then, the thumb skips over more than 2 keys between letters in the QWERTY layout.

Before we move on to optimising this sorry situation, let’s briefly go over how I am calculating these numbers.

We have two important quantities here:

The total distance travelled from letter

is symmetric, we can write compactly

. We can calculate this from the Reuters corpus as before, or note that because

describes a Markov chain, then the left eigenvector of

with eigenvalue 1 is simply

Finally then, the average distance for this keyboard, encoded in

It is this quantity written at the top of the previous plot.

There are a few constraints on possible keyboard layouts, namely

We are then searching over a permutation space. Each possible legal keyboard layout corresponds to a permutation applied equally to the rows and columns of

. We can apply this permutation, perform the calculation above and retrieve an average distance value.

permutations to consider, so we can’t check them all by brute force.

Both techniques performed similarly, slightly surprisingly, finding many possible improved keyboard layouts. Neither is an exact approach, so there may be better layouts out there, but the best is one I dub NALMY/ZVDNALMY/GIERO: 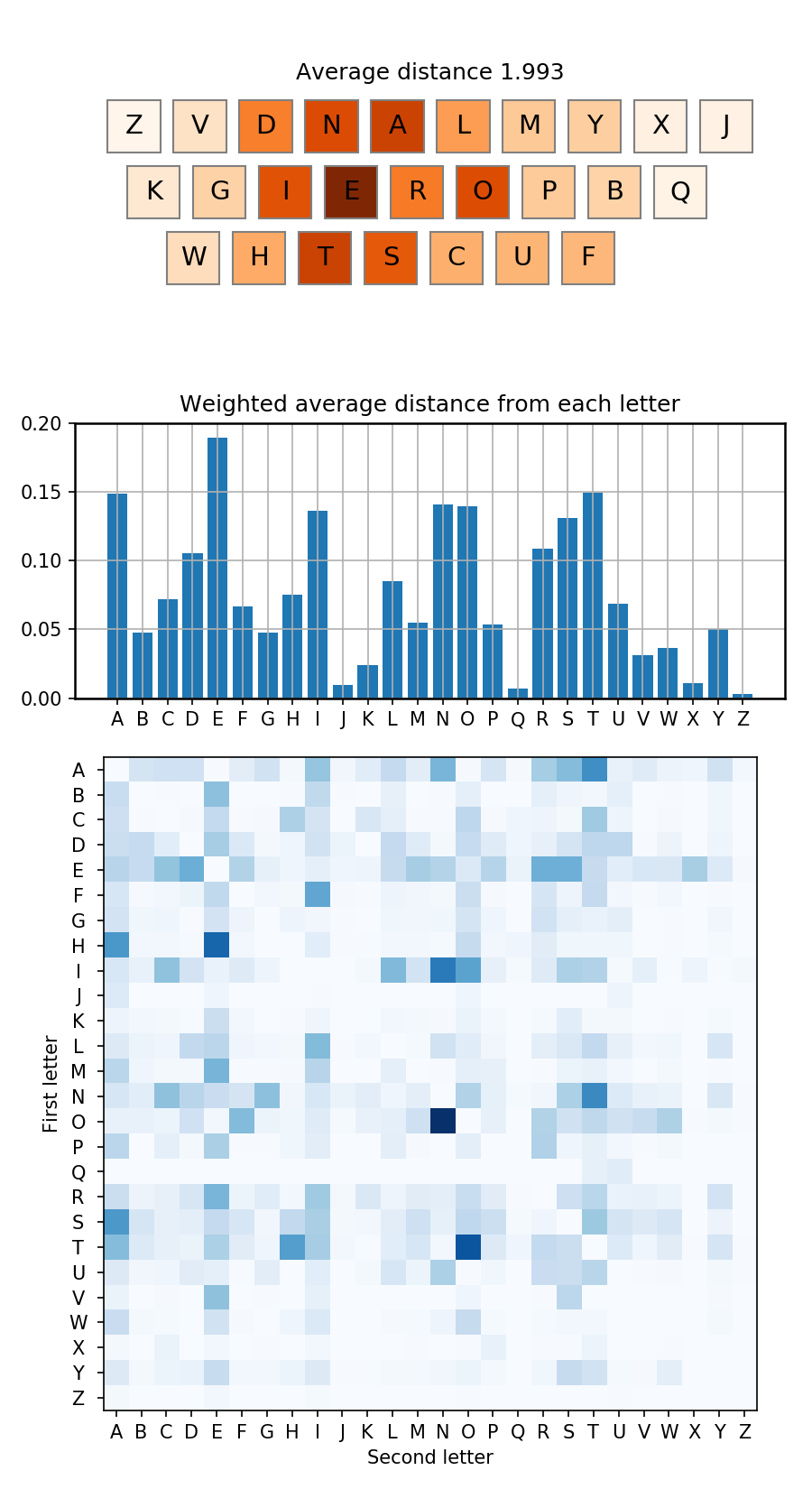 The average distance is down to below 2! 1.99324 to be exact. This is a 39% improvement on standard QWERTY, and means on average the thumb only has to skip over one key between letters rather than 2.

Here are a few other good configurations I found, which all have average distances below 2:

You can see a few commonalities between these approaches:

Beyond these obvious tricks, it is also important to get some of the ‘second tier’ letters in just the right spots, including H, C, L and D. These letters usually want to be near particular letters, so their exact placement depends quite sensitively on the details of the central core of frequent letters.

We can directly compare the efficacy of NALMY compared to QWERTY, for example by calculating the distances of every word in the English language for the two approaches. In the following, I have plotted the distance per letter for every word: 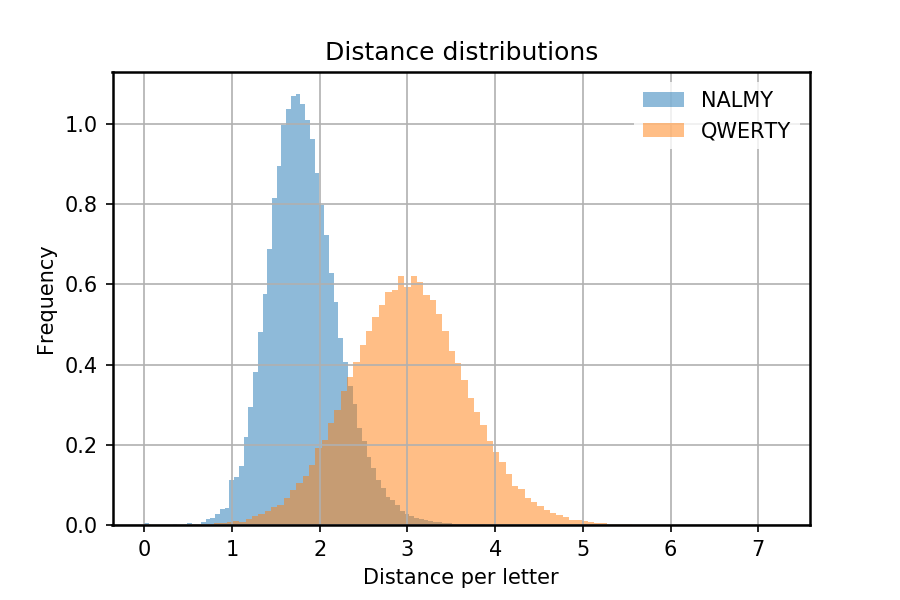 These are distributions over English words, and it is immediately clear that many words in NALMY require a distance of less than 2 units (keys) per letter, much better than QWERTY’s average of around 3.

The worst words to type in QWERTY, based on the distance required per letter, are palapalai, papal, jalapa

The worst words to type in NALMY, based on the distance required per letter, are syzygy, Uzbek, cozy

We can also plot these word distances as a joint distribution:

The most improved by NALMY are words like ‘Alan’, ‘land’ and ‘dial’, all of which previously necessitated ponderous swoops across the keyboard.

Getting down to the crux of the issue, was my irritation at the word ‘banana’ really justified? Well with the whole of the English language to benchmark against, I can confirm that:

As a final justification for my efforts, suppose that

then NALMY would save 5 million kilometres of thumb motion per day! Say each 8mm of thumb motion burns around 1 J of energy, then that’s 625 GJ of energy saved per day, or a decrease in average global human power expenditure of 10 MW.

The shoddy code behind this post can be found on the repository for this blog as a Jupyter notebook, full of cryptic indexing and single-character variables used interchangeably:

I very much welcome comments on more efficient approaches to this problem!