Now that we’ve entered the knockout rounds, I thought I’d see how my predictions stacked up against reality, and how this new data changes the prediction of the winner.

First of all, let’s see how the group stages played out compared to the model.

Below are the first 8 knockout matches, with the predictions from the previous post. The actual participants in the match are highlighted in green.

The predictions aren’t too terrible, getting the right answer in 50% of the cases. The biggest failure by a country mile is the prediction that Germany would win their group, which as we now know, was sadly not the case.

Given this injection of certainty, let’s see how the prediction of the overall winners have changed:

As might be expected, with Germany out of the picture most teams are more likely to win now, with notable boosts for Brazil and Spain.

Of course, this ignores the fact that the Elo scores of the teams should be expected to change given the flurry of wins and losses over the past couple of weeks. Let’s add those new ratings in and recalculate:

There are again some quite significant changes to the ordering here. Brazil is unchanged, way out at the top. Spain and Portugal’s odds took a significant beating, and England and Colombia slipped too.

The largest jump in relative winning odds is Croatia, which we would now say is 6 times more likely to win than we expected at the beginning of the tournament! Beating Argentina 3-0 (amongst other wins) took their Elo from 1856 to 1953, a jump of nearly a hundred.

Assuming they played a match against an opponent they were previously even-odds at beating, we would now say their chance of winning has increased by approximately a third.

Finally, let’s see how the tournament might play out for a few teams: 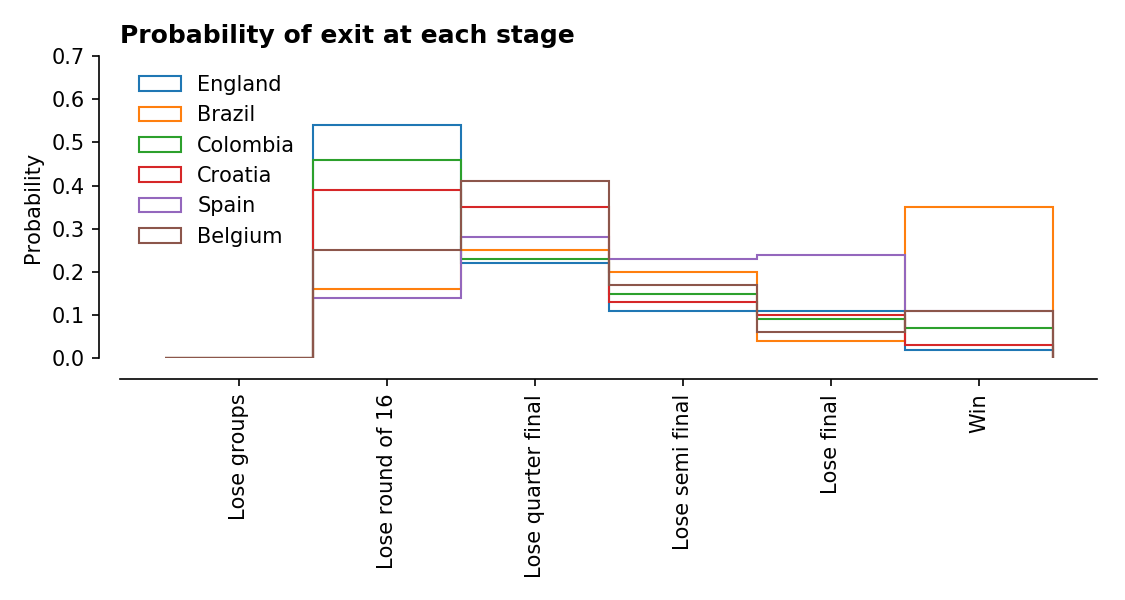 Classically, England are still most likely to leave at their first knockout game, and Brazil are more likely to win overall than to lose any of their games.